Updates on the 2022 elections 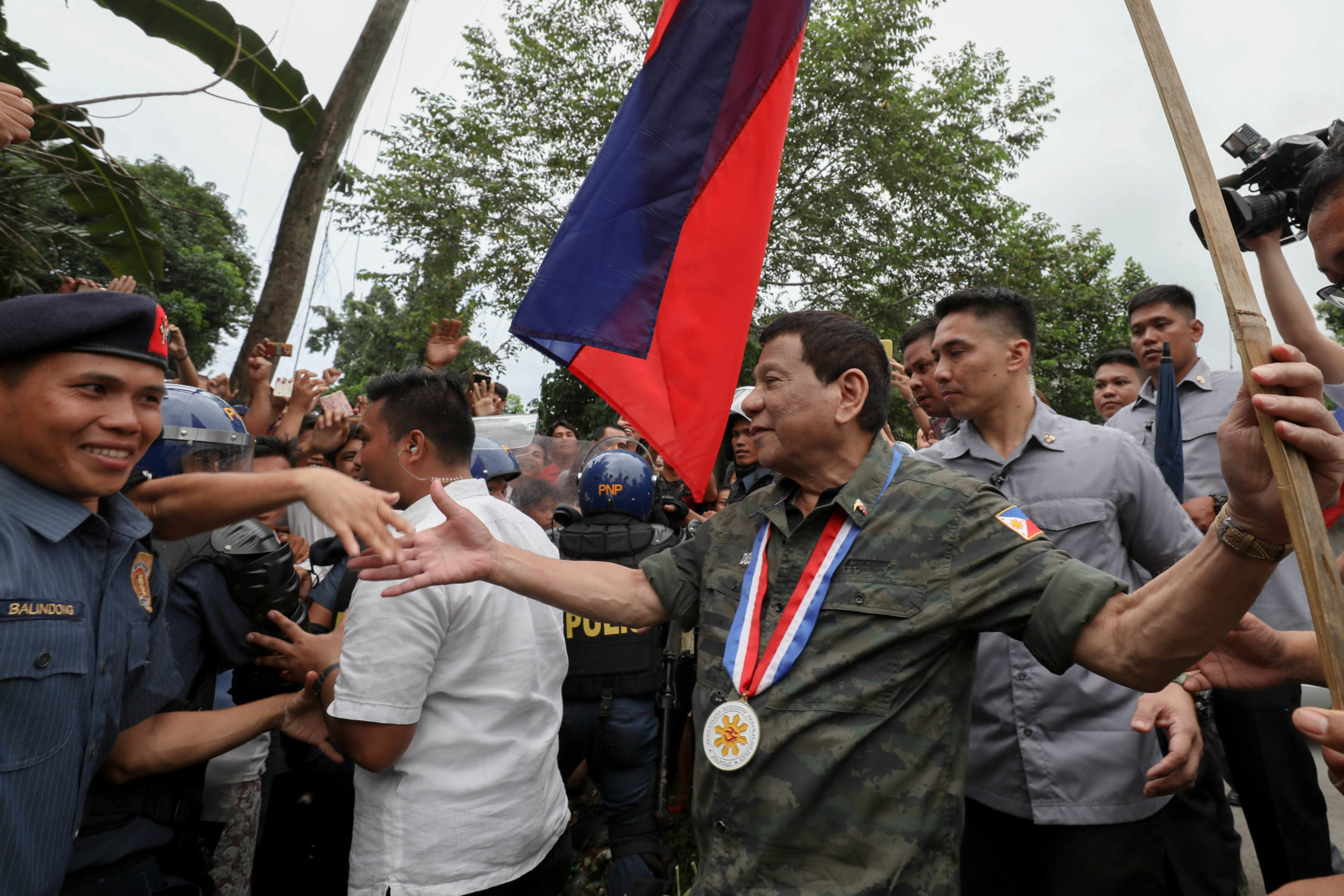 On February 8, 2022, the election campaign officially began. There are now three months left for candidates to win votes from an electorate of around 65 million people. Candidates are running for more than 18,000 offices at local, provincial, and national levels. The International Observer Mission (IOM) is also launching its campaign for independent election observation.

The question of who will replace Rodrigo Duterte is being followed not only with keen interest but also with great concern. According to Pulse Asia polls, Ferdinand Marcos Jr. is in first place with 53% of votes, and Vice President and opposition candidate Leni Robredo is second with 20%. “In off-the-record comments, some EU officials say their fingers are crossed for a Robredo victory. Europe’s relations with the Philippines have been strained since Duterte won the presidency in 2016,” according to . A more liberal government with a strong commitment to human rights improvements may also allow for economic and trade ties to be strengthened again.

Former high government officials publicly voiced their support for Robredo. In a statement on January 13, 2022, a total of 23 associates of former President Fidel V. Ramos (1992-1998) expressed support. Another statement followed on February 1 by almost a hundred people, mainly including former Cabinet members, military officers and diplomats of the government of President Begino S. Aquino III (2010-2016).

But as the son of a former dictator, why are there so many supporters of Ferdinand Marcos Jr in the Philippine population? University of Wisconsin professor Alfred McCoy says that the majority of the young Filipino society has no memories of the Marcos dictatorship. Additionally, societies often romanticize past dictatorships during times of crisis. The Campaign Against the Return of the Marcoses and Martial Law in Southern Mindanao (CARMMA-SMR) aims to counter distorted historical narratives. In videos and other materials, survivors recount the human rights violations during the Marcos dictatorship so that voters can educate themselves. Grace Mahinay says, “As a survivor of the Marcos dictatorship, I am angry. I strongly oppose the attempt of [Ferdinand „Bongbong“ Marcos Jr.] to get back to Malacañang. He and his family have never shown remorse or acknowledged the numerous human rights violations during his father’s despotic rule. He is not apologetic.”

Now that the candidates for the May 2022 election have been finalized, election observers comment on so-far developments in the process of filing candidates. The period in which parties submitted their candidates for the election was followed by another period for substitution. Rodrigo Duterte took advantage of this already before his election as president in 2016.

This time Duterte and his daughter publicly changed their intentions of their respective candidacies more often (see all updates below). This is described by political scientist Prof. Julio Teehankee as “pure and simple power play. This does not involve the Filipino people. This is a game Game of Thrones, a game of political dynasties trying to come out with the optimal solution in a winning collation to protect their own political interests.” According to political scientist Dr. Jean Franco, it is precisely this repeated substitution of candidates that is unprecedented: “Substitution is okay for me if a candidate dies, is disqualified, or is incapacitated. But I really cannot understand if it’s because someone just withdraws.” There is no limit on substituting candidates, they can then run for election to another office despite withdrawing, and in the meantime candidates can change the party they are running with. Not only do these regulations need to be reviewed, according to former Commission on Election (Comlec) employee Luie Guia. An anti-dynasty law is also needed.

On Nov. 25, 2021, the four parties of the most prominent politically involved families allied to support the Marcos-Duterte tandem for election. According to political scientist Cleve Arguelles, an alliance of the Duterte, Marcos, Estrada, and Arroyo families serves their political influence and regaining of power. While the political dynasties are forming to jointly secure their interests, the eighth petition for the disqualification of presidential candidate Ferdinand Marcos Jr. was filed on December 7, 2021.

Initially, Sara Duterte-Carpio excluded a candidacy for national office, and President Rodrigo Duterte announced his intention to retire completely from politics. Shortly before closing, on November 15, 2021, it was announced that Rodrigo Duterte is now running as senator. The announcements of candidacy by Sara and Rodrigo Duterte, each made at short notice, are seen as a strategic move to generate attention. The presidential palace said Duterte’s bid as senator has nothing to do with the investigation of the International Criminal Court (ICC). The party list representatives Arlene Brosas (of Gabriela) and Carlos Zarate (of Bayan Muna) have called his candidacy “a desperate and vain attempt to evade prosecution.“

The opposition in particular wants to prevent a Marcos-Duterte tandem. Vice presidential candidate Walden Bello, for example, calls it the “Marcos-Duterte axis of Evil” and the goal of presidential candidate and current vice president Leni Robrero is to “avoid another Marcos presidency and stop President Rodrigo Duterte’s even longer exercise of power.” Meanwhile, the Commission on Elections (Comlec) has received five petitions challenging Marcos Jr.’s candidacy. “The move of Marcos Jr. to run for president […] triggered the issues about the alleged ill-gotten wealth of his family, the regime of his late father, and the issues against the former Senator which include his educational status in Oxford.” His Oxford degree proved to be a lie, according to Vera Files research. At least three of the petitions are based on unfiled tax filings between 1982 and 1985 and may not hold up because of basic legal frameworks – including the CARMMA’s (Campaign Against the Return of the Marcoses and Martial Law) disqualification petition.

October 8, 2021, was the deadline for registering candidates for next May’s election. Critics fear that the strategic game of replacing candidates at the very last minute (as in the 2016 elections) will be repeated.

On October 2, Rodrigo Duterte not only withdrew his controversial vice-presidential bid, but also announced to retire completely from politics after his term. At the same time, his long-term ally Bong Go registered his candidacy for that very office. Later, on the last day of registration, Roland dela Rosa, senator and former police chief (2016-2018), filed his presidential candidacy. There is a suspicion that dela Rosa is merely a placeholder. Aljazeera reports: “The declared candidates can still withdraw and be substituted by another candidate until November 15, which has raised speculation that [Sara] Duterte-Carpio could still make a last-minute entry into the presidential race. Her father took the same approach in 2016.”

In the final stages of registration, current Vice President and opposition leader Leni Robredo announced her presidential candidacy on Oct. 7 after a long wait: “We will defeat the old and rotten brand of politics.” Together with Senator Francis Pangilinan as the Liberal Party’s vice-presidential candidate, they form the only opposition tandem for the elections. Robredo condemns Duterte’s brutal crackdown in the so-called war on drugs. Moreover, her decision is a reaction to the presidential candidacy of Bongbong Marcos. Most recently, she criticized his ongoing refusal to apologize for human rights violations during his father’s authoritarian dictatorship. Imprisoned Senator Leila de Lima, as another opposition representative and Liberal Party member, registered for reelection as senator through a delegate. For further information about the registration of candidates watch Rapplers analyses.

Rodrigo Duterte will be the candidate of his PDP-Laban party for vice president in the 2022 elections. However, who will run alongside him for the presidency itself remains unclear. A Duterte tandem with his daughter Sara Duterte will not happen after all – nor will she run for president in other constellations.

Duterte’s longtime adviser Christopher Go declined the party’s presidential nomination. PNP-Laban senior vice president Karlo Nograles said that in the vice-presidential position, Duterte would “guarantee continuity of the administration’s programs during the past five years,” Critics stress that Duterte’s candidacy circumvents the Constitution, which prohibits him from running again as a presidential candidate. There is also the risk of another power grab, as Duterte would succeed again to the presidential office in the position of vice president in the event of a presidential resignation. This would also allow Duterte to avoid legal consequences regarding his first term.

Senate President Vicente Sotto and Senator Panfilo Lacson officially presented themselves as a duo (Lacson as candidate for President, Sotto as Vice President) on September 8, 2021. Both were considered Duterte supporters and now intend to challenge his leadership style but take a politically similar line. Current Manila mayor Isko Moreno is running together with former Senator Willie Ong as his vice candidat. Former boxer and current Duterte critic Manny Pacquiao is also running as a presidential candidate, as he announced on September 19. He wants particularly to fight the corruption among the elites.

Still one of the leading presidential candidates in polls is Bobong Marcos, the son of former dictator Ferdinand Marcos. According to Gretchen Abuse, the decisive factor here is the collective memory of younger generations, stemming in part from an insufficient and superficial examination of the Marcos dictatorship in schools. “The youth’s idealism, critical thinking, and enthusiasm in their search for truth needs to be nurtured, even protected. Because if not, the Philippines will keep on voting for authoritarian leaders.“

With regard to the end of Rodrigo Duterte’s term in May 2022, he and his daughter Sara Duterte (mayor of Davao City) announced their intention to run in the 2022 national elections as a Duterte-Duterte tandem – the daughter as presidential candidate and the father for vice president.

Such a constellation is worrisome because of the apparent “height of dynastic electoral politics,” but especially because „allowing [Duterte] to run for [vice president] can open the door to another dictatorship.“ Christian Monsod, former chairman of the Commission on Elections (Comlec), explains that Duterte, however, cannot run for the second-highest government position because he would theoretically succeed him as president. The Philippine Constitution limits a presidency to a one-time six-year term, exhausted by Duterte then. According to Monsod, it is thus clear that Duterte and his supporters have a plan „for him to occupy his office again through the backdoor because he cannot run for president again.“ This could make it more difficult for him to be held accountable by the International Criminal Court (ICC) for crimes against humanity in the context of his so-called war on drugs, or dodge possible corruption charges against himself and his family.

According to Alan German, a political strategist, a strong and functioning opposition is needed to counter the culture of impunity and polarization and prevent civil unrest. Duterte’s administration, however, is cracking down on politicians who criticize the government’s line. The case against Antonio Trillanes, for example, will likely continue to the Supreme Court after the Court of Appeals twice upheld his amnesty. The imprisoned opposition politician Leila De Lima, whom we reported on in March, is also continuing to fight an alleged false statement that strongly incriminates her.

Since June 17, 2021, also Philippine pages or their posts can now be found on Facebook and Instagram with the label “state-controlled media“. This should lead to more transparency, especially since the election campaign will increasingly take place online due to the pandemic. Radyo Pilipinas, the Philippine News Agency (PNA) and Radio Television Malacañang (RTVM), for example, are classified in this way. For the labelling “state-controlled media,” Facebook considers, among other factors, the ownership structure, financial sources, and editorial guidelines, such as transparency, diversity, and independence of content sources.