CIVICUS Monitor, the Global research collaboration that tracks fundamental freedoms in 196 countries has just published their annual report “People Under Attack” 2020. In this report, CIVICUS has downgraded the Philippines from “obstructed” to “repressed”. Civic freedoms and human rights in the Philippines are on the decline ever since Duterte came into power in 2016. During 2020 the situation has further deteriorated. “(…) we have seen systematic intimidation, attacks and vilification of civil society and activists, an increased crackdown on press freedoms and a pervasive culture of impunity take root” says Josef Benedict, who works as Asia-Pacific Civic Space researcher for CIVICUS Monitor. Reasons for the downgrade were the concerns about attacks on journalists and human rights defenders as well as the draconic anti-terror law. “The shutdown of a major outlet, ABS-CBN, is shocking, especially during a pandemic when information is critical to saving lives. Threats and attacks against journalists have contributed to self-censorship and have had a chilling effect within the media sector. On top of this, there are serious concerns that the new anti-terrorism law, which has few safeguards, will institutionalize and facilitate an abuse of power,” said Benedict. The organization says that the Philippines are not alone in these restrictions of civic freedoms. These violations have been found in other countries in Southeast Asia such as Vietnam, Cambodia and Myanmar. 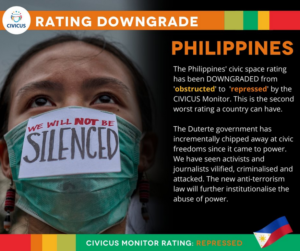