Extrajudicial killings (EJK) in May 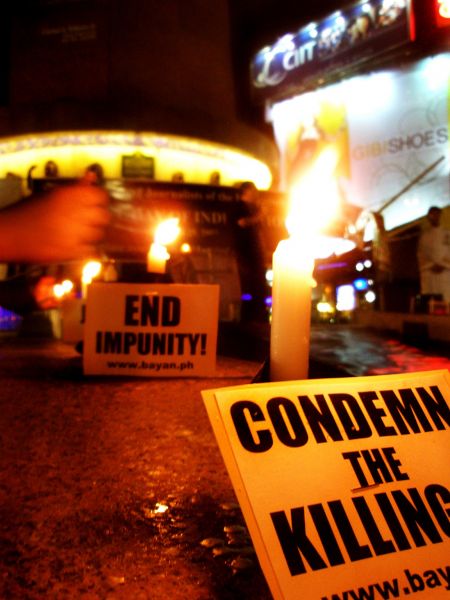 On April 15, the activist Jesus Passon Jr was shot dead by unidentified motorcyclists in Silay City in Negros Occidental. The series of extrajudicial killings in the severely affected Negros Occidental continues. Passon was a member of the Pasil Homeowners Association and Kadamay Negros, he campaigned for the improvement of housing conditions for the marginalized and poor urban population.

On May 2nd, the evening before World Press Freedom Day, John Heredia was killed. The journalist was the former and long-time head of the National Union of Journalists of the Philippines (NUJP) in Capiz and most recently municipal administrator in Pilar (Capiz). Heredia’s wife Criselda Azarcon-Heredia, a human rights lawyer and anti-mining activist, survived an assassination attempt in September 2019 and has been red-tagged before.

Two peace consultants from the National Democratic Front of the Philippines (NDFP) were killed in seperate incidents on May 28. Former Catholic priest Rustico Tan, who worked as a peace consultant in the 1980s and was later active in community organic farming, was gunned down while sleeping in Pilar, Cebu. Reynaldo Bocala and his maid Arguelles Epago were shot during a raid on warrants in Pavia, Iloilo. Bocala’s wife Ma. Concepcion “Concha” Araneta-Bocala is one of the 19 members of the Communist Party of the Philippines (CPP) tagged as alleged terrorists by the Anti-Terrorism Counsil (ATC) on May 13. The Internal Affairs Service (IAS) of the Philippine National Police (PNP) will conduct its own probe but rights group Karapatan is calling for an independent investigation.

In the future the PNP will supposedly provide access to records to the Department of Justice (DOJ) and thus to the Commission on Human Right (CHR) for the investigation of EJKs and drug-related killings. A memorandum of agreement will include records of deaths during police drug operations since 2016.

To be able hold police officers accountable for their crimes and to support the surviving families and victims of EJKs in the so-called drug war, two human rights organizations of the Filipino North American diaspora are mobilizing donations to provide political, psychosocial, financial, and legal assistance. The Filipino American Human Rights Alliance (Fahra) and the Global Pinoy Diaspora Canada (GPDC) also see their coalition and lobbying efforts as a reflection of “growing dissatisfaction with Mr. Duterte among overseas Filipino workers.”