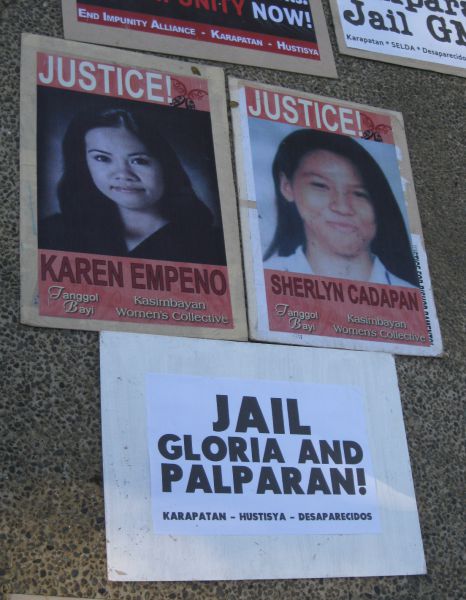 After nearly three years on the run, the Federal Police arrested the retired General Jovito Palparan in Manila. He was wanted in connection with the disappearance of the university students Sherlyn Cadapan and Karen Empeño. They were abducted in 2006 by soldiers under Palparan’s command and tortured and sexually assaulted while in detention. Both women remain missing ever since.

Often referred to as Berdugo, “The Butcher”, by human rights activists, Palparan is also implicated in several dozen extrajudicial killings and other severe human rights violations. Units under his command were notorious for their brutality against political activists and alleged supporters of the communist insurgency.

“Despite far-reaching promises by President Aquino only in a handful of cases have the perpetrators within the military been brought to justice for their involvement in severe human rights violations.”, said Johannes Icking, coordinator of the German Action Network Human Rights – Philippines. “Palparan’s arrest therefore is an encouraging sign and a welcome first step to end the prevailing culture of impunity in the Philippines.”

In the Philippines, political activists, investigative journalists, union, and peasant leaders frequently become victims of human rights violations. According to human rights organizations,  under Aquino’s predecessor Gloria Arroyo alone , 1.200 politically motivated murders took place. Among the victims were also many partner organizations of the Action Network. Up until now, perpetrators and masterminds of these crimes, often to be found among the ranks of the state security forces, were rarely brought to justice.

Recently, German politicians expressed their concern about the failure to address and prosecute these crimes. “The ongoing violence and the impunity create a climate of fear. The Philippines needs to guarantee that perpetrators are brought to justice and that activist of the civil society are protected from violence.”, said Uwe Kekeritz, Member of the German Parliament for the Green Party. And Sabine Bätzing-Lichtenthäler (Social-Democrats), Member of the Human Rights Committee, called upon the Philippine Government in the case of Romeo Capalla, a fair-trade activist who was murdered in March: “I expect the Philippines to fulfill its obligations under international law and to bring the perpetrators to justice.”

The Action Network Human Rights – Philippines calls upon the Philippine Government to follow-up Palparan’s arrest by stepping up their efforts to prosecute all severe human rights violations in the country.  Only then will the culture of impunity be broken.

For more background information about the enforced disappearance of Sherlyn Cadapan and Karen Empeño please view our report: “Human Rights in the Philippines – Aspiration and Reality” (2014)