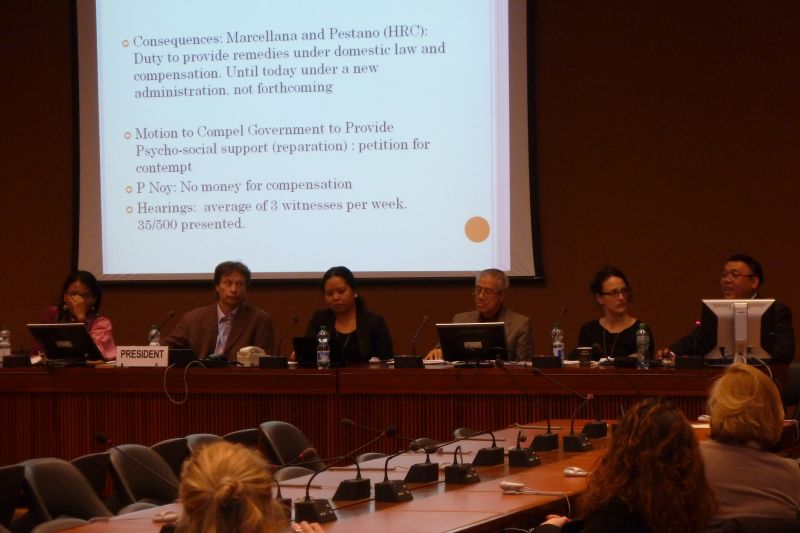 On March 6, the Action Network Human Rights-Philippines (AMP), in close cooperation with Amnesty International and Franciscans International, successfully organized a Side Event at the UN Human Rights Council. The event was themed “Human rights defenders combating impunity in the Philippines”.
Experienced Filipino Human Rights Activists gave an insight into their work and explained why impunity still exists and how it should be tackled. A special focus was put on the hindrances within the Justice and the Security Sector to break impunity.

The afternoon took off with two powerful short films on exemplary human rights violations: the Maguindanao massacre and the abduction and torture of Raymond Manalo. Afterwards, Prof. Harry Roque Jr. (University of the Philippines) explained how the climate of impunity makes possible such horrible atrocities as the Maguindanao massacre and also gave reasons for impunity by pointing to political alliances, corruption and the weak Philippine justice system.

Cristina Palabay (Karapatan) reacted to the case of Raymond Manolo by giving an update on the prosecution of General Palparan, the problem of Private Armed Groups and the Campaign to End Impunity in the Philippines. Hazel Galang (Amnesty International) and Maike Grabowski (Action Network Human Rights-Philippines) then shifted the focus to the upcoming UPR of the Philippines. They summarized the recommendations that were made to the Philippines in 2008 and outlined which of those had been accepted and rejected and reported on the status of implementation. In his second presentation Prof. Roque outlined the weaknesses of the legal system with all his experience as attorney and professor of law. Max de Mesa (Philippine Alliance of Human Rights Advocates) also drew on his long experience as human rights activist and spoke about the situation of Human Rights Defenders in the Philippines, especially in relation to the Security Sector. Finally questions and recommendations for the upcoming Universal Periodic Review of the Philippines in May 2012 were suggested to the audience by the panelists.

The audience consisted of more than 60 people from state delegations and international NGOs. Several guests took the chance to engage in an interactive dialogue during the second half of the event. They raised questions, illustrated their own experiences and discussed which recommendations should best be made to the Philippine government. Michael Schirmer (Human Rights Team of German Diaconia) served as facilitator of the event.

Aside from the side event, the delegation of AMP and AI also used the time in Geneva to brief the delegates of various countries on the human rights situation in the Philippines.

The second cycle of Universal Periodic Review of the Philippines will be held this May 28 to June 3, 2012.